What good is philosophy for? 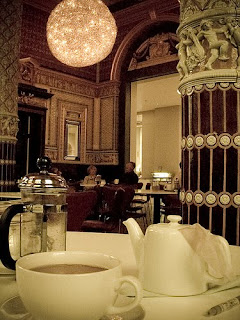 A summery morning in the sumptuous V&A café. Aroma of freshly brewed coffee wafting in the air. Topic chosen for the day: “what good is philosophy for?”

In the past few years, the “cafe-philosophers” probed into the mysteries of the universe, exploring the conscious mind of Mankind, above and beyond the mind of other animals, debating the existence of God, and asking the eternally unanswerable questions about life and death, seeking the moral justification of crime and punishment, war and peace, or even contemplating on decadent questions about art, beauty, luxury, the sexual revolution or eroticism. It makes one wonder if philosophy is indeed a leisurely activity only enjoyed by the rich and idle class.

After introduction by Robert who proposed the question, Alfred gave his idea about the educational value of Philosophy by explaining the different branches of this discipline. Michael added his opinion: “Philosophy is the Queen of sciences. Our world is full of mysteries. In philosophy we ask questions about problems that other branches of science cannot explain. It is therapeutic for the mind.”

Jerry joined in: “Why do you want to ask questions that you will never find answers, or find answers that always disappoint you and make your life even more miserable than before?”

Sherry added her point of view: “in my opinion, philosophy is like art, which has no practical use. Art is there to inspire us. You cannot make money from fine art or philosophy...”

Sherry: “Art that makes money is not fine art. It is what I call Con, a form of charlatanism. Same for philosophy, which has no practical use and it is not something you can make money from. Unlike biology, chemistry, mathematics or physics, philosophy cannot be used to diagnose or cure diseases, or to calculate the distance between planets or make space rockets. Philosophy is an exercise of the mind. Like what we are doing now, a group of high-minded intellectuals gather together, we ask questions and try to find answers and we refute our answers and debate with others. Philosophy is about abstract thinking, not about doing things or making things.”

Christian: “But philosophy CAN be put to practical use. Look at the question about the Clash of Civilizations, it is about one group of people formed their own philosophy and the other group of people follow another school of ideology and they disagree with each other and this disagreement eventually leads to violent act like wars.”

Sherry: “Yes, but in the theory of so-called Clash of civilizations, we wonder if Huntington was referring to the ideological conflict or the geo-political conflict.”

Christian: “Political science is part of the philosophy. In philosophy we often ask moral questions, such as slavery, capital punishment, human right and so on. Politicians’ actions are usually dictated by their specific school of philosophy.”

Someone began to make a point about the differences of psychological state between a slave and a free labourer. The topic veered off the original question: the purpose of philosophy to the question of slavery. Paul asked whether a free man, who owns his own body, can sell himself off as a voluntary slave, surrendering his soul and his sanity.
...
Posted by xiaowei at 09:57

Email ThisBlogThis!Share to TwitterShare to FacebookShare to Pinterest
Labels: café-philo, purpose of philosophy