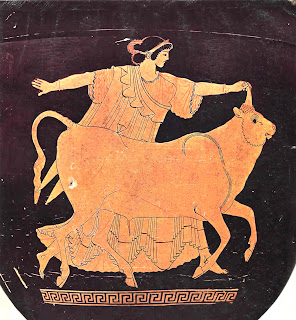 Several opinions diverged as to whether Christianity truly represents European civilization. One opinion is that southern Europe where Catholicism prevails tends to have larger number of pious churchgoers than north-western Europe, which has been increasingly embracing secularism since the 20th century.

Michael remarked that “from a historical perspective, violence can be a motor of civilization”. Ramon disagreed by saying that the Mongol invasion of Europe in the 13th century was definitely not a “motor of civilization”. The Mongols were “Barbarians”. I wonder what Ramon thinks of the violent history of Spanish conquest of Americas, was it driven by the "motor of civilization" or by greed for gold?  Does he think that violence committed in the name of Christianity is then no longer "Barbaric"?

Several participants pointed out that the Eurocentric view was partly to blame for the ills of the 18th and 19th centuries, namely racism, slavery and colonialism. It is therefore controversial to have any delusions of the superiority of European civilization by using Christianity as a basis or standard for European identity.

What is civilization anyway? Christian explains it denotes people living in cities, who do not have to work on land to make a living, so that they can devote their time to develop ideas.

By comparing European philosophies with ideologies from other parts of the world, I noticed one distinctive feature of European (enlightened, non-religious) thinking lies in its emphasis on individual freedom, whereas in many other parts of the world, especially in the East Asia, the traditional thoughts on the mechanism of maintaining a coherent society emphasises obedience to authority (e.g. Confucianism), or passive escapism (e.g. Buddhism), or worshipping an invisible God or several gods (most other formal religions).

Looking back in history, religion has never been the exclusive motor for the advancement of civilization. Religion is often a tool used by the State to make people not to think for themselves but to follow the doctrines from the “holy scripture.” It plays primarily the role of “brain-washer“ or “mind control”. Although religion was a source of inspiration for art and music in the early stages, it can equally act as a repressive regime that hampers social and economic progress, restricts the creativity of artists and suppresses the freedom of ideas by individuals.

Instead of flagging up Christianity as the main fibre of European civilization, Ramon should quote the Renaissance of the 16th century and the Enlightenment of the 18th century as the most important achievements of European civilization. Without these two historical movements, of which the main aims were to liberate people’s mind from the repression of religion, to break away from the authoritarian voice of the Church that ruled Europe for centuries, Europe would still be living in the Dark Ages.
Posted by xiaowei at 11:18