Religion, Suffering and the Pursuit of Wealth 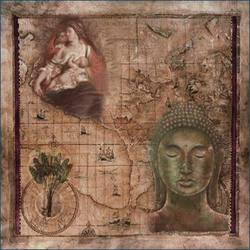 “All life is suffering”, the Buddha is reputed to have said. In Christianity the Sermon on the Mount promises future rewards for those suffering now: “Blessed are the poor, meek etc.”

Many countries with a strong religious ethos are, or were historically, economically poor – and religious / political authorities have certainly used the promise of post-death riches to make a virtue of necessity (and stop the peasants revolting…). But can one conclude that religious statements on suffering are contingent on economic contexts, and that once living conditions improve they lose their relevance ? Is the pursuit of wealth the final answer ?

An expanded definition of suffering suggests an alternative interpretation. Major religions have traditionally seen the pursuit of material wealth as inimical to spiritual development, but as part of a wider warning against the idea that true happiness can be found through satisfying the demands of the ego (self) in the external world. Wealth is just one of several traps: others include power, reputation, fame, comparison with other people, defining one’s value by virtue of a role (e.g. job title, parent), or by adherence to a system of ideas (religious / political).

Of course some of these things can be pleasurable, even creditable. However suffering comes because (1) A person may not achieve any of these external factors of validation (2) Even if they do, the happiness is often transitory or unsatisfactory - a loved one leaves, we buy something but soon get bored and have to buy something else etc. Suffering, defined as the inevitable result of over-emphasising the needs of the ego in the external world, is as big an issue for a rich person as for a poor one - though the external trigger issues might be different.

The proposed alternative is to go within the mind and seek peace / happiness by accessing one’s deep Self (spirit, divine essence, Buddha nature, God, Tao, atman etc.). It is interesting to note that, whereas theologies tend to divide both within and between religions, the mystical traditions of major religions are more tolerant and tend to unify around the concept of ‘one God, many paths’.

There are many Critical Thinking issues that arise in discussions on ‘the pursuit of wealth’. Some will be discussed in a separate blog entry.
Posted by xiaowei at 08:12